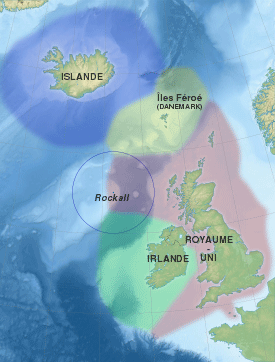 June 10, 1997 activists from the ecology group Greenpeace occupied the diminutive land of Rockall (25 meters diameter by 20 meters high) in the Atlantic Ocean, 450 kilometers from Scotland. The occupation was part of Greenpeace’s Atlantic Frontier Campaign for protecting the seas bordering Rockall from possible oil spills caused by drilling.
Six days after the initial occupation, Rockall became the capital of the Global State of Waveland. Greenpeace has rejected British sovereignty and, as part of the Atlantic Frontier Campaign, the flag of the Global State of Waveland was raised in the tiny land by three Greenpeace activists.