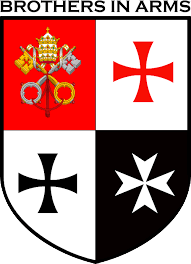 In 1118, at the behest of the Cistercian Abbot of Clairvaux, Bernard of Fontaine-lès-Dijon, the Templar people was formed in the form of a lay-monastic Order and was called Pauperes Commilitones Christi Templique Salomonis.
The Templar people were born from this constitution.
The Pope's appeal during this early part of the Middle Ages was so resounding that the constitution of the Templar people was immediate.
The historically best known members of the Templar People were the famous Templar Knights, but there were numerous who served the Order.
In fact, in addition to the members of the Order, the Templar people were also composed of all the people who revolved around the Order:
squires, waiters, cooks, teachers, farriers, artisans, etc.
Moreover, all the family members of the persons indicated above also contributed to the Templars' people.
As an indication, the Templar people around 1200 had about 22,000 Knights of Arms in Europe (historical data preserved in the National Library of France in Paris).
At the time it was normal that there were thirty people following a knight in arms, so we can estimate the Templar Nation composed of about 150,000 people.
For comparison, during the same period the city of Nice, in France, had about 3,000 inhabitants.
The Templar people (knights in arms, family, servants), continued their existence until the early 1300s, to be precise until 1307, the year in which began a real attempt to exterminate by the Kingdom of France (King Philip IV) and the State of the Catholic Church (Pope Clement V).
Despite the perpetrated genocide (over 100,000 people were killed, with a population that at that time had 170,000 people), the Templar people continued its existence.
Initially, the Templars followed the Order in its movements, but over the centuries, permanent places of residence were created in the various cities called Priories, Granges, Commanderies.
Despite the various historical vicissitudes, the Templars have arrived until today, reunited in a nation, despite being dispersed in different states and with different citizenships.
In 2015 the members of the Templar Order (about 1500 people), members of other organizations that gathered a part of the Templar people and other members of the unorganized Templar people, asked the Grand Prior of V.E.O.S.P.S.S. - Pauperes Commilitones Christi Templique Salomonis to bring together the Templar people in a real nation and appointed a Council of Regency to organize the nation.
After three years of studies, evaluations and consultations (many international law experts were consulted), in 2018 the Regency Council elected a President and issued a Constitutional Charter creating, through the principle of self-determination of the peoples, the Templar Nation.
The Regency Council has also written a Constitutional Charter, which represents the constitutional basis of the Templar Nation.
The Templar Nation today is formed by the Templar people, that is, by those people who are linked by ideological principles and a common culture, by a centuries-old ancestry and, not least, by a common religiosity (the Templars are defined as Christian-yeoshuites, because faithful to the word of Jesus Christ).
From a legal point of view, under international law, the subject holder of the right to self-determination is the people as a subject distinct from the state.
The principle of self-determination of a people constitutes a norm of general international law, that is a norm that produces legal effects (rights and obligations) for the whole Community of States.
Moreover, this principle also represents a norm of “ius cogens”, that is, an imperative right: it means that it is a supreme and inalienable principle of international law, for which it cannot be derogated by an international convention.
Therefore, a people has the right to self-determination and to choose their own political regime, regardless of whether he have been subject to foreign domination.
A community of individuals (a people) who share some common characteristics such as language, history, traditions, culture, ethnicity and eventually a government, constitutes a nation, from the Latin “natio”, in english "birth", (Federico Chabod, The idea of a nation, Laterza, Bari 1961).
According to Johann Gottfried Herder in the life of a nation, the unity of culture and language comes first of political unity, of the State and of the constitution (Kulturnation).
The nation thus bases its cohesion on language, culture and tradition, not on the abstract rigidity of a political obligation.
Ernest Renan defines the nation as the soul and spiritual principle of a people, which enjoys a rich legacy of memories and current consensus.
Some authors, such as Jürgen Habermas, consider the concept of nation as a free social contract between peoples or between persons constituting a people, who recognize themselves in a common Constitution, thanks to the concept of "group of belonging".
It follows that the nation exists as long as it finds its place in the minds and hearts of its constituents.
Therefore, a nation is a community of individuals (a people), conscious of being bound by a common historical, linguistic, cultural and religious tradition.
In the case of the Templar people, this is specifically about a "nation without a state", because the people belong to different States.
The Templar Nation adheres to the "International Convention on Economic, Social and Cultural Rights" of 1966 (entered into force in 1976), to the "Universal Declaration of the Rights of Peoples", also called "Algiers Charter", dated 1976, and the "United Nations Universal Declaration of Human Rights" (UN) of 10 December 1948.
Given that the current Templar population is quite small and that over the centuries has been the object of real attempts to exterminate by several States, as well as “damnatio memoriae”, it is right to define the Templar people as a "supranational minority" to be protected.
All those who, for historical, cultural or ideological reasons, recognize themselves in the ideals of the Templars, can join the Templar Nation and obtain the Nationality.