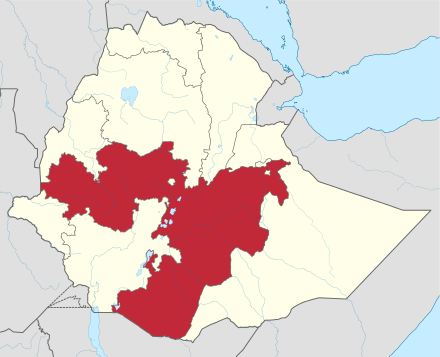 Oromo is also called Biyya-Oromo or Oromiya. This was one of the free nations located in the Horn of Africa until its colonization and occupation by Abyssinia at the end of the XIX century. It has borders with Somalia, the lands of Afar and Djibouti on the east, Sudan to the west, with Somalia and Kenya to the south, and with Amhara to the north. The surface area is approximately 600 thousand square kilometers.
The Oromo People are among the most numerous in Africa. Census data are not reliable; however, there are more than 20 million people whose first language is Oromo and who consider themselves Oromos.
These People enjoy a homogeneous culture and share a common language, origin and history. In addition, they have a rich folklore, oral tradition, music and art. Even though a large part of this culture and its traditions have survived fierce oppression, another part has been forgotten and lost.

Oromo has the potential for becoming one of the richest countries in Africa. Agriculture is the backbone of its economy and the lifeline of more than 90% of the population. The Oromos are specialists in raising livestock. Herding livestock continues to be their main occupation. The greatest crops are coffee, which represents more than 60% foreign income that the Ethiopian regime receives.
Oromo also has important mineral deposits. There are gold mines in Adola and Laga Dambi in Sidamo. Platinum and silver are other valuable minerals found in Oromo.
The Oromo People need to be allowed to exercise their legitimate right to self-determination, to elect the type of sovereignty under which they want to live, as well as the type of political union that they wan to maintain with other nations. The main aspiration of this People is to recover their fundamental freedoms according to the principles established in the Statutes of the United Nations.
One of the most important political organisations in the region is the Oromo Liberation Front (OLF), founded in 1973 by Oromo nationalists; it has been one of the leaders in the Oromo People’s fight against Ethiopia’s colonial regime. The OLF’s greatest objective is to achieve compliance to the inalienable right of the Oromo People to self-determination, so as to put an end to more than a century of oppression and exploitation.