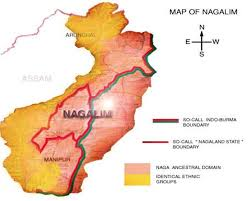 Nagalim is situated between China, India and Burma and covers a compact area of 120,000 square kilometers. The part of Nagaland controlled by India consists in a territory that, at present, is led by four different administrative units: the states of Assam, Arunachal Pradesh, Manipur and Nagalim.
The western part of Nagalim, controlled by Myanmar (approximately 100,000 square kilometers) makes use of two administrative units: those from the Kachin state and the Saganing division. The Nagas are a racially and ethnically distinct people. Today there are 16 large tribes and 20 minority tribes, with a population that exceeds 3 million. About 95% of the Nagas are Christians.
The Nagalim region is rich with mineral resources, such as oil, gold, nickel, copper, and precious and semi-precious metals, such as uranium. Due to the exploitation of these resources by various companies the ecological balance of these lands, which at one time was very rich, has now declined. Even though these companies have been able to take away a large part of the resources, they didn’t build even one industry inside the Nagalim territory.
Since there are no factories or technical institutions in Nagalim, employment possibilities for the Naga people are very limited and, for this reason, the majority of them live in deep poverty.
To be able to recognize the Nagalim region’s present, you must know its past. August 15, 1947 India became an independent state; however, the Nagas were denied entrance into the Indian Union. Before this date, a Naga delegation had met with Mahatma Gandhi, the father of India, who, upon knowing the intentions of the Nagas, pronounced a historical sentence: “The Nagas have every right to be independent.”
The Naga National Council, founded in 1946, recognised the independence and the sovereignty of the state of Nagaland and declared its independence in August 1947; therefore, Nagaland never formed part of the Indian Union, from the moment of its independence. During the same year 1947, an agreement was signed between the National Council and the government of India, known as the “9 Point Agreement”, through which the Naga people’s right to free self-determination, and also “the right of the Nagas to develop by themselves, according to their freely expressed desires.”
Nonetheless, in November 1949, the Indian government unilaterally decided to invalidate the “9 Point Agreement”. This situation is still going on now. The Indian army has dealt with quashing any Nagalim intentions of autonomy through the use of weapons. The encounters were violent until a ceasefire between India and the Nagalim was signed in 1997. Peace talks began in Paris in 1998 and were continued in Amsterdam in 1999. Nonetheless, the conflict persists, even though with less intensity.
One of the most important organisations of the Naga people is the National Socialist Council of Nagaland (NSCN), which has attained various things during the last two decades. One of the most important was that the Human Rights Commission of the United Nations that will allow the leader of the NSCN to give a speech in the 54th Session of the assembly, given in April 1998. There, the delegates of more than a hundred countries could know, first-hand, the real problems that the Naga people were going through, such as the necessity of reaching a solution for the Indian-Naga differences. Diverse international leaders expressed and maintain their support for advancing the process for peace and achieved concrete results in favor of the Nagalim region.