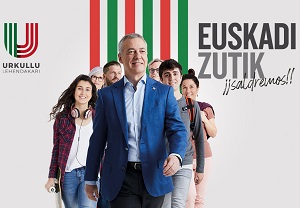 After all the repression exercised by the Spanish Government against the Catalan independence movement, the Basque nationalists have achieved am impressive victory in the autonomous elections in the Basque County.

The UUN hail the triumph of the Basque Nationalist Party (PNV for its Spanish name), led by Iñigo Urkullu. This party received a total of 39.1% of the votes in the three provinces and increased up to a total of 31 seats in Parliament. Its traditional partner, the PSE, obtained 10 seats. Therefore, the union of these two formations gives them the majority and they won’t have to look for alliances with other forces to promote their agenda in Parliament.

This will be Urkullu’s third consecutive mandate; he will become the second president of the Basque Government with more time in the office, second only to Antonio Ardanza.

The PNV has 125 years of history, of the conservative government, with a strong Catholic substrata that looks for the Euskadi independence, which includes the Basque provinces, Navarro and several French territories. The good management under his government, the achievements obtained through agreements with successive governments in Madrid, as well as the image of a serious party have consolidated the PNV as the most important political formation of the Basque Country.

The positions assumed by the Catalan separationists were criticised by the PNV. Included, this party denied signing a document with 12 Spanish, Valencian, Catalan and the leftist Nationalist movement parties where they demanded the right to self-determination and liberty for the incarcerated Catalan leaders. The PNV expressed that, despite the solidarity and nearness between the Basque Nationalism and the Catalan pro-Independentists, they don’t share the positions assumed in this document on the Spanish State.