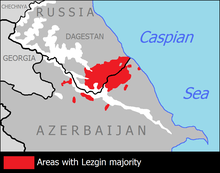 The territory where the Lezgin people live is divided into two parts, between two countries. The northern part is located in the Republic of Dagestan, one of the Russian Federation regions, while the southern zone is in the Republic of Azerbaijan. The Lezgins in Dagestan are one of 14 nations. This separation has a strong impact on the Lezgin ethnicity, because the people are divided between two countries. The borders with Azerbaijan broke family, economic and cultural ties with the unified Lezgin nation. Without due determination of its Status, the preservation of the Lezgins’ identity runs a serious risk.
The main problem that the Lezgins face is precisely their lack of status, which impedes them from ensuring their rights as a nation in the territory where they originally resided. As a result, the Lezgins’ ethnicity is disappearing and their socio-economic situation is deteriorating.
Government officials of Dagestan were chosen keeping in mind the ethnic composition of its population; however without a clear regulation, it has created an imbalance. As a result, the Lezgins are badly represented in government bodies. This is particularly important, because there is a high level of corruption in Dagestan and a clan system that affects the well-being of the Lezgins. The south of Dagestan receives fewer funds, its economy and social sphere are underdeveloped and the unemployment level is very high.
The Unrepresented United Nations Organisation (UUN) advocates a pacific campaign for the recognition of the Lezgin people as an ethnic group with a legal status, so that they may maintain their language and political rights; it also asks for the restoration of the inalienable right to exist as a nation in the territory where this people has traditionally resided. The Unrepresented United Nations (UUN) feels that the Russian Federation and Azerbaijan will have to advance toward the total restoration of the Lezgins’ rights, in accordance with the principles recognised universally in international law and a constant dialogue with representatives from the Lezgin community.
One of the strongest organisations, with the most popular support, is the Federal Lezgin National and Cultural Autonomy (FLNCA), which represents the Lezgin people before the Russian Federation officials. The main objectives of the FLNCA are the protection, preservation and development of the national and cultural interests of the Lezgins.
In order to have a complete development, the Lezgins, divided by two state boundaries, must receive a legal status in the lands where they have resided historically. This will make the preservation of their culture and language possible. To obtain all this, the creation of an autonomous national territory is essential.