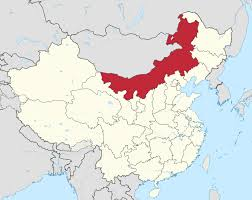 Inner Mongolia is an autonomous Mongol region that lies within the People’s Republic of China. The regions borders with the provinces of Heilongjiang, Jilin, Liaoning, Hebei, Shanxi, Shaanxi, with Mongolia and Russia. Its area occupies 12% of the Chinese territory and its population exceeds 25 million.
The Mongols represent around 17% of Inner Mongolia’s total population, which includes several Mongolian speaking groups, like the Buriats and the Oirats, which are officially recognised as Mongols. According to the last census, about 4 million Mongols are living in Inner Mongolia. In addition, there are more than half a million Mongols that live in other regions in China. The official language of Inner Mongolia is standard Mandarin and Mongolian.
During the last half a century – as a result of excessive Chinese agricultural cultivation, in the most sensitive parts of Inner Mongolian soil – this territory has been transformed into a desert. The ecosystem was destroyed due to the Chinese government’s unlawful exploitation of the region’s rich natural resources, as well as by the construction of highly pollutant factories in Inner Mongolia.
This territory has abundant mineral resources like coal, natural, natural gas, and cashmere and more natural deposits of niobium, zirconium, and beryllium than any other Chinese province.
On May 1, 1947 the Chinese Communist Party announced its first puppet governor of the Autonomous Region, the present Autonomous region of Inner Mongolia and, since that date, the Inner Mongolian People ha suffered a brutal regime that has deprived it of its main human rights.
Since then, diverse parts of the world demand a real autonomy for this region and that the colonial Communist regime, imposed by China, come to an end. The objective of many is to achieve a greater level of self-determination for the Inner Mongolian People, through pacific means.