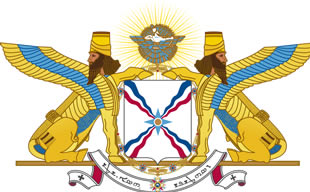 Assyria (Akkadian: Aššur), was a Semitic Akkadian kingdom, extant as a nation state from the late 25th or early–24th century BC until 605 BC.
The People of Assyria are the Assyrians are one of the indigenous populations of Iraq. The Assyria territory extends to northeast Iraq, the northeast Iran, Southeast Turkey and southeast Syria. The Assyrians totally support the efforts for consolidating a united secular and democratic Iraq, capable of respecting and maintaining the cultural diversity of society.
Although many Assyrians now live far from Assyria and the Middle East, mostly in the United States and Australia, a large number of this Diaspora would be willing to their native country if the political and economic stability were to return.
The Assyrians are represented by the Assyrian Universal Alliance (AUA).
Since 2003, the political instability in Iraq has left the Assyrians in a particularly vulnerable situation and approximately 250,000 Assyrians have abandoned Assyria and Iraq. According to several humanitarian organizations, the religious minorities, including the Assyrians, represent 3% of the refugees, even though they represent only 3% of the Iraqi population.
The Assyrians have played key roles for the development of the present-day Iraq and continue to be fundamental in the economic, political and social restoration of the country. In order to protect their rights, the UNN considers it imperative that article 125 of the Iraqi Constitution be complied with and that the Assyrians political, cultural and educational rights must be respected, within the Federal Constitutional framework of Iraq.
The UNN feels that recognition of Assyria’s autonomy within Iraq is considered in the Constitution of this country and is based on popular outcry, both within the Assyrian community in Iraq as well as abroad.
The creation of an Assyria administration unit within the Iraqi federal framework is a solution provided for in the Transitory Administration Law. Recognition of the Assyrian territoriality would mean guaranteeing a political representation for this people and its physical protection.
The continuous acts of intimidation against the Assyrians inside Iraq and the inability of the Iraqi government to prevent attacks against the Assyrian community are elements that illustrate the need for this region’s autonomy, undoubtedly an essential requirement before the furthermost members of the Diaspora decide to return to the country. Therefore, the UNN greatly advocates autonomy for the Assyrians, as well as the return to Iraq of the Assyrian Diaspora.