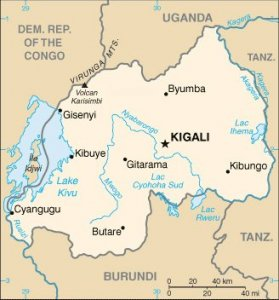 The Batwa people originally settled in the mountainous regions surrounding Lake Kivu and Lake Edward, in the Great Lakes region in Africa. The estimated population of the Batwa people, divided between Rwanda, Burundi, Uganda and the Eastern Congo, varies between 86,000 and 112,000. The Batwa in Rwanda are one of three ethnic groups. They represent only 0.4%, while the Hutu reach 85% and the Tutsi reach 14% of the total population of Rwanda. Since the Batwa were taken out of the forests, many of them became ceramists and, at present, ceramics are synonymous with the identity of the Batwa people. Due to their low social status, the Batwa have limited access to education and few know how to read; therefore, only some manage to keep a job. All of this influences the fact that the Batwa earn a salary that is lower than the yearly average, which is $200 USD. Analysts agree in emphasizing that the Batwa are an isolated and deprived group inside the Rwandese society and are often discriminated against. Traditionally, the Batwa society is not hierarchical and decisions are taken as a group. This also applies to property and to land rights, which has made unions between Batwa communities and those of other ethnic groups difficult. In the name of a non-tribal Rwanda and to supposedly maintain harmony in the society, the Rwandan government refuses to recognize the Batwa as a different ethnic group. The 2003 Constitution prohibits ethnic discrimination; however, this has unfortunately brought on the establishment of a legal vacuum that impedes adopting the necessary measures for recognizing the Batwa people and confronting the discrimination that this ethnic group faces.

The Unrepresented United Nations (UUN) feels that the policies regarding land in Rwanda have violate the human rights of the Batwa people, because they have been left homeless and without land. The organisation is asking for an adequate compensation for those who have lost their land and home and, in addition, the Batwa refugees that returned after the genocide of 1994 must receive an equal treatment and access to their property, just like any other Rwandan. The UUN supports Batwa’s efforts to be recognized as a distinct ethnic group and believes that this decision will open the doors to the development of the Batwa community, with the help of international organisations and the Rwandan government. Furthermore, the recognition will allow the Batwa community to become better organized. The organisation that presently represents Batwa is the Cultural Conservation Act, because the restrictions to freedom of association that exist today in Rwanda have interfered with the work done by organisations that had represented the Batwa in the past.
The Twa, whose plural is Batwa, are a pygmy people in Central Africa and are the oldest registered inhabitants in the area of the African continent that now comprises the territories of Ruanda and Burundi.
When the Hutus, a tribe originating from the Bantus, arrived in the region, they dominated the Batwa pygmies and subdued their population. Around the XV century AD, the Tutsis, a Nilonic people that possibly came from Ethiopia, overcame both the Batwa pygmies as well as the Hutus. The Batwa mainly live in rural and inaccessible areas and are marginalized by modern African societies. They dedicate themselves to pottery and subsistence agriculture. The reside in small shanty towns dispersed in isolated spots, in adobe and reed shacks called poto-poto; as pygmies, they are very small in stature and interrelate only among themselves.
The difficulties in carrying out a census and the ups and downs, through which the Batwa pygmies have passed, have made all estimates of the number of the present Twa population uncertain. This lack of trustworthy data and contradictory has caused them to not be considered as a Minority at Risk, or rather, 100,000 people or 1% of the population.