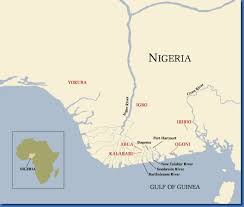 Strangely enough, the discovery of oil in the Niger Delta was the worst of news for the Ogoni People. The American oil company, Shell, arrived in the region in 1957 and gave way to an industrial process that has affected not only the Ogoni society, but all of Nigeria.
Currently, oil sales represent almost 90% of the income from Nigerian exports. The land of the Niger Delta is the source of almost 90% of Nigerian oil.
For the Ogoni who live in this region, the social and environmental costs from the exploitation of oil have been very high. Poverty has increased in the Ogoni region in recent years. Other than the oil installations and refineries, there are no other industries in Ogoni to reduce unemployment. This situation increases the psycho-social degradation.
There is no concrete plan for the development that will allow a reduction of the enormous lacuna in the infrastructural development of the region. The health facilities don’t work well, and the schools are collapsing. In addition, the classrooms and laboratories are poorly equipped. With all these difficulties, it has been difficult to attract foreign investment in Ogoni.
The oil companies – especially Shell – haven’t established a system for fair compensation. Furthermore, Shell has become involved in community conflicts, applying the rule of “divide and conquer”. Shell pays the chiefs to keep their communities calm, as well as violent youths so that they will protect the installations in the area.
The costs to the environment from exploitation of oil have been enormous. The contamination of drinking water, of arable land and fishing zones has damaged the Ogoni’s economy.
The Unrepresented United Nations Organisation (UUN) condemns any type of exploitation of natural resources that places the local environment, as well as the culture, in danger. The Unrepresented United Nations (UUN) has criticized the destruction caused by the Shell Company in the area, starting with the development of canals, highways and oil pipelines that have infiltrated the currents and rivers of the Niger Delta.
The exploitation of hydrocarbons in Ogoni is carried out without consulting with this People. The Unrecognised United Nations (UUN) supports the land rights of indigenous peoples and requests that political decisions not be made without first having the consent of the persons who live on these lands.
The Movement for the Survival of the Ogoni People is one of the most important of the region. Founded in 1990, it is a democratic mass movement that represents the Ogoni community, starting with launching the Announcement of the Ogoni Rights which was presented to the Nigerian Government, because it contains the principal demands of the Ogoni People so that social, economic ad environmental justice will be completed in the region.
This Announcement asks that the Ogoni take control of political decisions made in their territory. The Ogoni People are seeking “political autonomy for participating in questions regarding the Republic as a distinct and separate entity.” The Announcement demands the right to control and use, proportioned fairly, of the economic resources the Ogoni’s development, as well as the right to prevent further degradation of the environment and ecology.