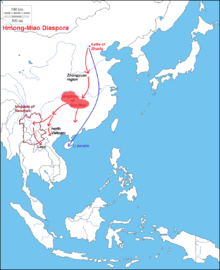 The Hmong are an Asiatic ethnic group that inhabits the mountainous regions of China, Vietnam, Laos and Thailand. A large part of the Hmong fought against the Pathet Lao, the Laotian equivalent of the National Liberation front of Vietnam or the Viet Cong. After the victory of the Pathet Lao, thousands of Hmong sought political asylum in Thailand. A large group immigrated to the United States, while others headed towards Australia, France, the French Guyana and Canada. Currently, some 8,000 Hmong live in Thailand, mainly in Isan, in the fields near the Laotian border.

Most of the Hmong population in Laos lives in the country’s northeast mountainous zone. The provinces inhabited by the Hmong Chao Fa are: Houaphanh, Xieng, khouang, Sayaboury and the city of Luang Prebang, along the Mekong River. The region’s mountain peaks are generally over 2800 meters. In addition, dense forests cover the northern and eastern areas. The Hmong territory borders on the east with Vietnam, to the north with China and to the northwest with Burma.
One of the most important organisations of this region is the Federated ChaoFa, which proclaims self-government for the territories inhabited by the Hmong in Laos (with a population of approximately 3000,000). Its constitution was adopted in July 1988. The Federated State Hmong ChaoFa is based on democratic principles and transparency, exchange of power and no discrimination. International cooperation and the organization of the Hmong people were joined together by the World Congress of the Hmong People.